In the Orre Region, there are no wild Pokťmon so Pokťballs are really hard to come by as, evidently are Wild Pokťmon. You begin with Espeon (Lv. 25_ and Umbreon (Lv. 26).
A Short time after the game starts, you find your partner...Mirei who is being kidnapped by Team Snagem because she can sense the Shadow Aura in some of the Pokťmon Team Snagem Use, so you two agree to save these Evil Pokťmon from their trainers

To do this, you must try and fact Team Snagem and stop them trying to stop you from healing the Shadow Pokťmon

When you catch Shadow Pokťmon They have 5 Purple Status Bars...these show the amount of Shadowness that the Pokťmon has. When it's fully Shadow it only has the following attack but it gains attacks as you slowly heal...however when all 5 bards are gone, your Pokťmon is still Shadow. You need to go to the Shrine in Agate Town after that and your Pokťmon shall be healed and will get all EXP earned as you healed them. You can also rename them when its healed. They also get a ribbon showing that they have healed from their evilness. Gender Chances are as random as Wild Pokťmon 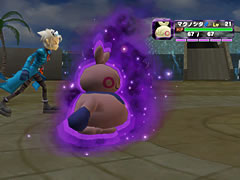 Shadow Pokťmon may enter a Hyper Mode which causes them to only use Shadow Rush and it's Critical Hit Ratio will be a lot higher. To Calm it down you need to us the command Call Out. This will also help heal your Pokťmon There are multiple ways to heal the Pokťmon from Shadowness and here a few are:

In this game, you need to complete it before you can trade with Pokťmon Ruby/Sapphire/Fire Red/Leaf Green and you can only save when using PCs.
There are also some Pokťmon that you can only get after going through the game again and again which would require trading later on...or a lot of time.

In battle, instead of the command Run (with Attack, Pokťmon and Items) You have the command called Call Out, this will make your Shadow Pokťmon come Out of Hyper Mode which will help lower the Shadow Bar. It also helps Awaken Sleeping Pokťmon