This update may be amended throughout the day so be sure to check back. If you have any ideas for the site, be sure to send them in
With the new generation out, the Chatroom & Discord Chat has been rife with discussion while the WiFi Chatroom has been a place for battles & trades, so be sure to visit them. Our Forums have also had these discussion and are a bustling trade and competitive section for the games. Be sure to like our FaceBook Page.
Last Update: 20:17 GMT
Edit @ 07:47: Magikarp Jump
Edit @ 11:17: Pokťmon Duel Updates 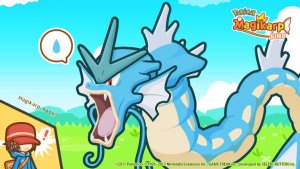 The new mobile game, Magikarp Jump, came out in a surprise release only in Italy on Wednesday and as such we are continuing our coverage of this game. As we have finished the main narrative, our coverage of the game is starting to come to a close. If you see anything you'd wish us cover with the game, feel free to contact us
07:47: Updated the League Listings & Events page
09:17: It is now live in Japan. With this, a Version 1.0.1 patch has come which includes support for English, French, German, Japanese, Korean, Spanish and Traditional Chinese languages
09:33: Updated our section with all English localisations thus far
09:53: The maximum motivation bonus you can obtain through levelling up is 600%. Further updates to the game will add more bonuses
12:05: League Listings and Food page. I also made a page on Jump Power
15:34: Created a small page on Treasure
16:01: Updated the League Listings and Magikarp Style Page
Edit @ 17:35: The maximum rank at present is 51. After that, all experience gained will provide Support Candy
18:53: There are no new stages after Expert League 3, but a promise of more in future updates. You can repeat Expert League 3 for more experience and coins
19:03: Updated the League Listings with the final stages
19:54: Even after completion of the game, when you repeat Expert League 3 and finish it, you will get the final rewards every time
20:17: Updated the Training page to give details for up to Level 50 for half the training 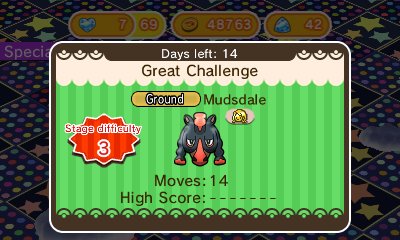 Tomorrow, a new version of Pokťmon Duel is being uploaded following the weekly maintenance. In this update, some changes are being made to a few figures.
Infernape
Removed the Dodge move and replaced it with Detect, which gives it MP+1 next turn
The Drive Kick move is boosted from 80 to 90
Keldeo
The ability, Justified, has removed an effect that reduces damage due to the number of Dark-type Pokťmon on your team
Sacred Sword wheel size increased
Miss wheel size decreased
Darkrai
Removed Night Shade and added the Dark Void attack which makes the opponent fall asleep and causes all adjacent Pokťmon to spin. If White attacks are landed on, then they fall Asleep
Bad Dream ability altered to only affect opposing Pokťmon
Dark Leap attack has been altered to allow for you to choose not to move Darkrai
Dark Pulse move has a larger wheel size
Banette
Changes effect of the Cursed attack to only affect the opponent
Night Shade has an increase in power of 10 and switches position with Shadow Claw
Absol
Removed Double-Edge and added Perish Song which applies a Curse Marker to all adjacent Pokťmon
Removed Razor Wind and added Night Slash with a power of 70
Removed Scratch and added Razor Wind
Murkrow
Replaces Peck with Gold Attack Sucker Punch
Decreases size of Miss
Hydreigon
Added Hydreigon to the Band Attack ability and altered it to include the Speed Booster ability as well.