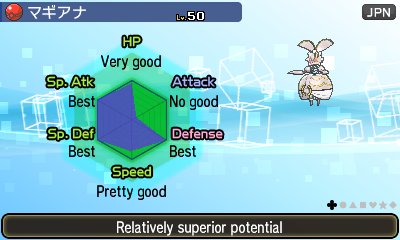 For a Quick way to calculate, use our IV Calculator

There's a lot of things that influence what stats you get when you finally overcome the odds and receive a pokemon at level 100. Say you have a Salamence, and you decide to battle someone else's level 100 Salamence. Your Salamence uses Dragon Claw and takes half of the opponents HP away. In return, the other Salamence uses Dragon Claw as well and takes all of your Salamence's HP away. "What gives? Shouldn't the attacks do the same amount of damage?" Well, no. More than likely, the Salamence that got knocked out probably had lower HP and Special Defense than usual, along with Special Attack. This is influenced by a lot of values, but in particular, Individual Values.

Individual Values have the most influence on any stat of any pokemon. It's what makes every single pokemon unique and have different stats. Say we have the mega-defensive bug type, Shuckle, and it's EV trained in both defense and special defense and it's at level 100, and a neutral nature. If we look at the base stats for this pokemon's defense and special defense, they both say 230, so you'd figure there wouldn't be much of a difference, right? Well, in reality, there can be a pretty wide difference. At level 100, this Shuckle has a defense stat that is 466, and a Special Defense stat equaling 542. Quite a wide difference there, about 80 points separated. A person using this Shuckle had better watch out for attack based moves if they are relying on defense.

As for technical information pertaining to Individual Values, the equation for it will –usually- give a number between 0 and 31. Keep in mind that the equation's we have to the IV's are not the same as in the game, but they are extremely close. With these equations, it's best to calculate it closest to level 50 as possible for accurate results. If you're looking to calculate a pokemon's IVs that you have trained, then hopefully you know the Effort Points it gained. If you don't then the math will be completely inaccurate if you just stick the stats in the equation. If you don't already know, Hidden Power is calculated completely on IV's.

Now that I've showed how much they can affect stats, let's grab the equation for determining a pokemon's Individual Value. Keep in mind that this is NOT for Hit Points. That has its own equation.

…And you probably don't know what Math.Ceiling means either. It's basically a term used when you want something rounded up, like to the Ceiling. If it was rounding down, like to a floor, it would be Math.Floor. Simple right? There's also a flaw in this equation, as it counts all of the Effort points, not the ones that have been added to the stat which is what we want outta there, so this equation is a little more accurate.

As for the HP Individual Value equation, here it is without edit:

Of course, we face the same problem as the other equation, so here's the edited version:

As you can see there's a lot of things you need in order to do these equations to get the Individual Value that this returns to you. The most important thing you need is the stat, apparently. The second thing you need is the Stat, which is basically what effect the personality has towards your stats. Now because we know that Natures can give a +10% increase towards a stat, or a -10% decrease towards a stat, we need to convert that to an actual number so that it can work in the equation.

The last thing you need are the Effort Points gained from battle, which are explained in another guide. Effort Points are equal to zero if you never battled with it yet, or used rare candies to level up, or even used the daycare to level up. Anyway, suppose I went through Colosseum twice and caught two Forretress. Let's find all we can about the information we need about them so we can determine the IVs.

Seems like a lot of information, doesn't it? Well I can't argue with you there, but that's everything we need to do the equations out now. Let's use this information to find the IV of Attack of Forretress 1 first:

27, eh? That's actually almost close to the best it can be. Let's see how Forretress 2 does for the same test:

Wondering what the ~ is meaning? It's algebra for "about". As I stated before, these formulas will not be as accurate as the real things, but they are pretty darn close. At level 5 these equations won't be very accurate at all, so it's best to level up to at least 25 I recommend. Anyway, you get the idea for the main 5 stats, so let's just do the Hit Points one now cause I'm lazy. :P

If you look at Forretress 2's HP, it's 130, which is 9 points higher than this Forretress. It's a perfect example of when these equations can be inaccurate. The best thing you could do at this point is level it up further to get a bigger difference in the stats.

So how can I influence IV's? Well since IVs are given to a pokemon upon meeting, the best thing you can do is just receive a pokemon with high IV's. This means doing one of two things, or both. Catching pokemon a large amount of the same species of pokemon is an okay way, but you'll need a large stock of pokeballs and catching pokemon from the wild usually results with average/lower than average IVs. The second way to obtain IVs is breeding. Pokémon that are bred usually result with normal/higher than normal IVs. This is not true for every single pokemon however, as you can still get low IVs with breeded pokemon and uber IVs with wild pokemon. There really isn't much you can do to get good IVs except for persistent effort to get good IVs, just make sure you have the patience for it.

Pokémon X & Y have added to the IV system somewhat. In these games, if any Pokémon is captured in the wild that is in the No Eggs egg group, it will have 3 IVs at 31. In addition to this, if you capture a Pokémon in Friend Safari, they will automatically have two IVs at 31. This allows for even better breeding, especially when the new effect of the Destiny Knot item is in effect.

IV's are also given to you in the form of Characteristics in the Status Screen. Click here for details

Pokémon Sun & Moon did in fact change how you can see IVs. In this game, when you go to the IV Judge, he won't help you with your Pokémon, but when you hatch 20 eggs, he will open up the IV Judging part of the Box, allowing for you to get a graph detailing all of your Pokémon's data with a simple tap of them in the box.

In addition to this, when you use the unique feature, S.O.S. Battles, the Pokémon you encounter will get higher IVs as you continue the chain, with the wild Pokémon having up to 4 IVs at 31.

There is another feature also added into Pokémon Sun & Moon. This is called Hyper Training. When you have a Pokémon that is Level 100, you can take him to Mr. Hyper in Hau'oli City where, in exchange for a Bottle Cap, will bring one of your Pokémon's stats up to its highest potential or if you have found a rare Gold Bottle Cap you can improve all 6 stats at once. This change is superficial and only appears in battle and on the status screen. The IV is still as it was for the purposes of Hidden Power calculation and breeding, so you can't Hyper Train a Ditto to be perfect and then use it for breeding.