A long time ago in the early days of Red / Blue rumors constantly spread around about secret Pokemon. Things that make even Mewtwo quiver with fear. The extra evolutions of Venusaur, Blastoise, and Charizard, Pikablue, Mewthree, Chrono Mew, and the Crystal Onix among many, many others. Gamefreak might have been listening as they more or less gave us all of those. Mega starters, Marill, Mega Mewtwo, and Steelix sort of count right? While we did eventually get "Pikablue" it wasn't exactly the Mewtwo killer we all had hoped. Originally deployed to the ranks of Gold and Silver Azumarill wasn't very good at anything. It was slow and weak, only sporting slightly passable defenses. A decade and a half later in X and Y Azumarill finally had enough upgrades to stand tall in standard play. Huge Power, Waterfall, Aqua Jet + Belly Drum, Ice Punch, Superpower, Play Rough, and Double Edge made Azumarill a pretty scary thing to switch in on. Fairy / Water typing is probably the best overall typing in the game and Azumarill makes great use of it. Only a handful of things can switch in safely and even fewer can OHKO the tanky rabbit. Azumarill is a top tier threat that is very easy to underestimate. While its speed is low it more than makes up for it with typing, ability, stats, and movepool. It may be cute; but Azumarill is absolutely devastating.
Positives
- Huge Power gives it effectively 150 base attack.
- Water / Fairy is possibly the best "jack of all trades" typing combination in the game. It balances being defensive and offensive ridiculously well. Azumarill can switch in on a tremendous number of things and deal out the damage to even more.
- STAB Huge Power Aqua Jet smashes aside things like Blaziken, Volcarona, Excadrill, and many others in a single hit.
- Aqua Jet can now be bred alongside Belly Drum. I don't think I need to tell you how scary +6 Huge Power STAB priority moves can be.
- Choice Banded Waterfall + Play Rough alone crushes virtually every Pokemon you will ever see. Superpower and Double Edge make sure nothing else is safe.
- 100 HP alongside 80 base defenses makes Azumarill surprisingly bulky especially considering it has many resistances to come in on.

Negatives
- 50 base speed is really bad. It can be EVed to outrun some slower walls and Aqua Jet does compensate somewhat but there will be many times when you wish you were just slightly faster.
- Azumarill relies on Choice Band, Sub Punch or Belly Drum to deal most of its damage, all of which have huge disadvantages that can even make Azumarill a liability against certain teams.
- All entry hazards hit Azumarill hard. You will be worn down quickly without Rapid Spin, Defog, or Wish support.

Thick Fat: Fire and Ice-type moves deal 50% damage. Potentially halving your Attack stat to boost your resistance to types you already resist... don't do that.
Huge Power: The power of the Pokémon’s attacks is doubled; the effect is halved if the ability is changed (Skill Swap). 436 Attack is massive. 218 Attack is pitiful. If you aren't using Huge Power you probably aren't using Azumarill.
Hidden Ability (Available):
Sap Sipper: Attack is raised by one stage when the Pokémon is hit by a Grass-type move. User receives no damage from Grass-type attacks. The idea of making you immune to one of your weaknesses sounds cool, but you could also just run Huge Power and switch out of things that have Grass type moves. Grass Knot only hits you for 60 base power and Hidden Power Grass was weakened, so it's not like Azumarill even particularly fears Grass moves.

A Field of Azumarill

This is Azumarill's flagship set. The same thing it has been using ever since Diamond and Pearl gave it Aqua Jet. Choice Band Azumarill is a mighty sledgehammer that only a tiny handful of things can even hope to switch in on. Due to Azumarill's Fairy / Water typing it has little to fear from Dragons or Fires as it easily brushes them away. Aqua Jet packs enough power to OHKO any offensive Pokemon weak to it while Play Rough takes a bite out of anything defensive enough to try and stand up to it. Superpower smashes a giant hole in Ferrothorn who otherwise can take any move on this set. Waterfall is a good power move to slam Hippowdon, Skarmory, Forretress, and Landorus for massive damage. A final option is Return (or Double Edge). This move is almost exclusively to hit Mega Venusaur and Tentacruel hard and like Superpower won't see much use compared to your STAB moves.

On all the Azumarill sets here I have the same EVs listed. 252 Attack / 252 HP with no Speed. Due to the way Huge Power doubles your Attack after EVs you ALWAYS want 252 Attack EVs pretty much regardless of the set. You may want to take some EVs out of HP and put them in Speed however. Every team and player is different so there is no single right way to EV Azumarill but if you would like to outrun some specific threats here are the EVs to do so (the list assumes you run Adamant).

# of Speed EVs required to outrun...

This speed list applies to all the following sets as well.

The Tortoise & The Hare

Due to breeding mechanics changes Aqua Jet can now be bred alongside Belly Drum. It's very easy to shrug this set off as weak. After all, who cares about a 40 base power priority move? Just send in something that resists water and finish off the damaged rabbit right? Wrong. Belly Drum Azumarill is terrifying. Due to how common Choice Band is it is very easy to simply fake the Choice Band set and force your opponent to flee from a Banded Aqua Jet only for them to watch in horror as Azumarill goes completely nuclear. To give you an example of how devastating a +6 Azumarill Aqua Jet is it is approximately 60% more powerful than an Adamant Life Orb Lucario Close Combat. Sounds powerful? Here's some calculations.

I could go on and on about how many things +6 Aqua Jet completely eradicates. Most of the Pokemon I just listed are either considered Physical walls or simply resist Aqua Jet. Many of them fall after a single hit from Stealth Rock. There are a few things that can tank an Aqua Jet. Things like Celebi, defensive Rotom W, Latias, Mega Venusaur and several others don't have much to fear from Azumarill's boosted onslaught. To bring these Pokemon down a good partner is Assault Vest Tyranitar. AV Tyranitar can shrug off pretty much any hit from those Pokemon and Pursuit them, either KOing or damaging them enough that a +6 Aqua Jet can end the game.

Don't Grab It By The Ears

One downside to both the previous Azumarill sets is that certain opposing Pokemon simply prevent it from doing much at all if you don't predict right. Guess the wrong move on the Choice Band set and your Superpower will bounce off a Skarmory. Pick the wrong time to Belly Drum and you may take a hit that half health Azumarill simply can't survive. Sub Punch attempts to alleviate this issue by lowering the amount of prediction required. Substitute on something you force out then try to do as much damage as possible. With neither Choice Band nor Belly Drum the damage output on this set is pretty low, but due to Substitute you should be somewhat less prediction driven and if played right be able to deal significant damage almost every match. With Spikes and Stealth Rocks support Subpunch Azumarill can do a lot of damage very quickly.

Nothing. Literally nothing. In the past things like Toxic or Iron Ball + Fling were used to get around Jellicent and Slowbro but now with Azumarill's Fairy STAB almost nothing can take it down. Ice Punch used to be usable to hit Dragons but again, Fairy STAB makes that completely obsolete. These aren't even other options. Azumarill's movepool is so small it's amazing it has everything it needs with just a few moves.

Aqua Jet is cool to pick off Focus Sash users and some of the common Earthquake, Rock Slide, and Heat Wave spammers (Landorus, Terrakion, and Chandelure in particular). Azumarill has the bulk to tank a few hits and do some real damage if it can avoid getting Protected on multiple times.

As mind numbingly powerful as Azumarill is there are a small number of things that can wall it. Tentacruel resists every single move it commonly runs and can retaliate with STAB Sludge Bomb. Even the Belly Drummer can't muscle past Tentacruel's quivering mass. Qwilfish fares a little better with Intimidate bulking it up significantly enough that Azumarill will rarely do much to it. Mega Venusaur easily shreds any Azumarill set, resisting or otherwise ignoring every single common move and ripping it apart with Giga Drain. Amoonguss does similarly although it has to watch out for Ice Punch. Ferrothorn doesn't care about Azumarill's STABs but is OHKOed by Superpower. Slowbro takes a fair amount from Play Rough but generally beats it. Countering Azumarill is hard. Really hard. If it comes in safely you are going to have a bad time. But it is also very slow. If you can survive an Aqua Jet you can probably take a big chunk off Azumarill either preventing it from doing much more in the match, preventing the Sub Puncher from getting a Substitute, or outright killing the Belly Drummer. Every turn you give Azumarill to attack without retaliation is more free damage it will incur on your team so by playing aggressively you can probably keep it in check.

Azurill is the Pokemon embodiment of depression on all accounts. Not only do most of the official artwork show it as being saddened, it has the second weakest base stat total (only behind Sunkern by 10 extra points), and as to be expected, really only one stand out property about it, and thats Huge Power. It’s only home can be on a Trick Room team due to it’s horrendous speed, so even before letting your atoms get in a 17-mile radius of Azurill, make sure you have Trick Room support. Azurill does however get a vary of moves that try to make it seem good. Return or Double-Edge is a good STAB move that takes advantage of Azurill’s Huge Power. Waterfall is mostly just taken from the fact that it evolves into much better Water/Fairy Types, but again, makes use of Huge Power. Azurill doesn’t get any normal STAB Fairy attacking moves. Encore can lock opponents into usually unwanted moves and force switch-outs, so you can set up a Substitute or attack. Toxic helps break walls, which just make Azurill more depressed. Substitute helps you set up for attacks, or block status moves. Berry Juice or Oran Berry in the case Berry Juice is banned once again, make Azurill stay healthy for relatively long, and even helps with recoil damage from Double-Edge. Life Orb just makes Azurill do more damage, while simultaneously teaching it how to be emo and hurt itself. EV’s and nature help to reduce speed, which makes it faster in Trick Room, and maximize Attack. Azurill like anyone with mental illness, needs a lot of help to make it better, and even if it becomes better in ways, the scars of the past will always be there. In Azurill’s case, just generally being weak forever. 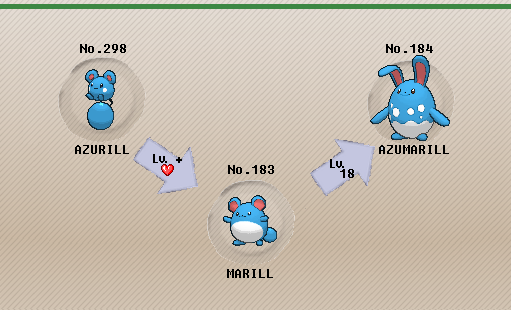 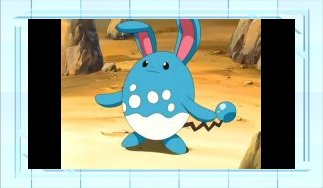