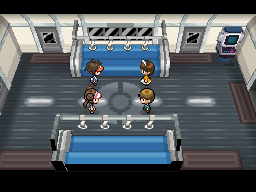 Like the Battle Towers in Sinnoh & Johto, the Battle Subway has you battle against many trainers, in streaks of seven at a go until you lose. These trainers have a massive pool of Pokémon from which their Pokémon are drawn and the number they use varies depending upon which type of battling you are doing. Single Battle draws three, Double draws four, Multi draws two. This means the combinations of Pokémon you encounter in the Battle Subway are endless. The trainers you face will also change depending on how far you get

As the Pokémon in the trainers'pool can reach numbers as high as 96, they have all been seperated within one single page per trainer. Use the drop-down menu to navigate.

To further aid your Battle Subway Challenges, the following list sorts the trainers by the line in which you'll battle them.