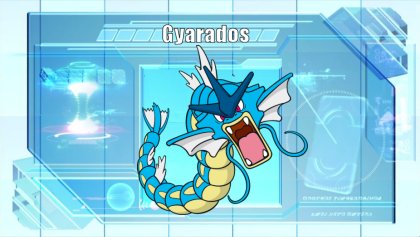 Gyarados, the Atrocious Pokťmon. It has an extremely aggressive nature. The Hyper Beam it shoots from its mouth totally incinerates all targets. Once it begins to rampage, a Gyarados will burn everything down, even in a harsh storm. Once Gyarados appears, its rage never settles until the Pokťmon has razed the fields and mountains around it. In ancient literature, there is a record of a Gyarados that razed a village when violence flared. I suspect this Pokťmon to be the true identity of a dragon written of in ancient texts, which claimed that it razed an entire village with white-hot beams from its maw.

Gyarados returns as one of the best singles Pokťmon in the game. Phenomenal typing, fantastic abilities that enable setup or snowballing, and a wide movepool to strike every Pokťmon under the sun all come together in a devastating package. The generational changes almost seem to be going out of their way to improve Gyarados. Moxie and Max Airstream synergize disgustingly well, enabling Gyarados to effectively Dragon Dance while attacking with a devastatingly strong STAB attack. Power Whip being added to its movepool gives Gyarados a long awaited answer against the Water types that could wall it in the past. Heavy Duty Boots removes Gyaradosí Stealth Rock issues, enabling more flexible pivoting giving Gyarados more use throughout a battle.

However, Gyarados has very real and significant flaws. A quadruple weakness to Electric is crippling, and downright fatal considering the prominence of Regieleki who reliably outspeeds and OHKOs. Gyaradosí Speed is underwhelming before being boosted and can easily be outsped and forced out by Choice Scarfers if Gyarados has only nabbed a single speed boost. And multiple boosts are required to muscle through traditional walls like Ferrothorn and Skarmory who can undo all of Gyaradosí work in a blink, and thus have Gyarados too compromised for another attempt at a sweep. Nonetheless, Gyarados is feared for good reason and holds a strong place in battle both past, present and for the foreseeable future.
Positives
Base 125 Attack and excellent boosting options in Dragon Dance and Moxie make Gyarados a fearsome attacker.
Excellent Abilities in Intimidate enabling setup or Moxie enabling out of control escalation.
Expansive movepool gives Gyarados an answer for almost every situation.
Fearsome Dynamax Abuser with STAB Max Airstream and Moxie enabling Gyarados to completely run away with battles.

Negatives
Quadruple Electric weakness is downright destructive, enabling anything with Electric coverage to maim if not outright knock out Gyarados
Base 81 Speed, while decent, is unimpressive without boosting, leaving Gyarados prey to many of the faster attackers running around.
Bounce is the only Physical STAB Flying move

This set revolves around abusing Dynamax to enable Gyarados to escalate out of control and then used the accrued boosts plus Choice Band to close out the game. However, Gyarados does not need to Dynamax right away. Its power with Choice Band is great and can easily nab a KO without Dynamaxing to get an early Moxie boost before going off to the races with Dynamax. Aside from STABs, Earthquake is valuable in covering opposing Electric and Steel types that resist Gyarados' Flying STAB and often carry the Super Effective coverage that necessitate a One Hit KO. Power Whip completes the set, covering Water types like Rotom Wash that don't mind either of Gyarados' STABs or Earthquake.

DYNAMAX:
Dynamaxing Gyarados is the star of the show. Bounce Max Airstream is ludicrously efficient, having a Base 130 STAB attack that gives a Dragon Dance Boost escalates out of hand stupidly quickly. Waterfall becoming Max Geyser gives another 1.5 Boost to Gyarados' main STAB in and out of Dynamax while Max Quake boost's Gyarados' impressive Special Defense to startling new heights. Doubling Gyarados' already above average HP and breaking the Choice lock are almost afterthoughts. Gyarados snowballs out of control so quickly it can near guarantee the result of a match the second it gets an itch..

EVs and Items:
Standard Sweeper Array to get the most out of Max Airstream and Moxie. Jolly nature is mandatory -Gyarados' speed is below average and it needs all the speed it can get to outspeed the numerous faster targets post boosting. While Adamant is nice, being outrun by Base 130 targets like Jolteon at +1 are not worth the risk. Choice Band is for maximum power out of Dynamax, to make it easier to nab KOs, though Life Orb can be considered for flexibility, Heavy Duty Boots to avoid being ravaged by Stealth Rock, Mystic Water to boost up the ever reliable Waterfall without drawback, etc..

Partners:
Anything that can exploit Electric Attacks makes for a great Gyarados partner. Gyarados attracts Electric Attacks like how honey attracts bears, so having a reliable partner that can cope with that weakpoint is greatly appreciated. Rhyperior stands out, having fantastic defense, also capable of pivoting into Rock attacks and in turn enjoys Gyarados checking the Water and Grass type attackers. Grass types also make for decent Gyarados partners, forming 2/3rds of a Water-Grass-Fire core, answering Rock types and Electric attacks. Tangrowth, Venusaur and Zarude can all take advantage of these traits while enjoying Gyarados checking Fire types.

Other Options:
Ice Fang -hits many Dragon types hard, but most are still hit hard by Max Airstream.
Fire Blast -can be a nasty surprise for Ferrothorn, and thus worth consideration, but is only a 2HKO and its lack of synergy is apparent.
Stone Edge -Gyarados' best option for Zapdos

Dragon Dance Gyarados makes for an effective late game cleaner or mid game hole puncher. Intimidate synergizes with Intimidate, giving Gyarados more chances to net an attack boost before going on the assault. Bounce is a good secondary STAB. Even if it is two turns, the power is impressive and few non Electric types like pivoting into Bounce and take major damage plus the risk of Paralysis. Taunt rounds out the set, preventing conventional walls like Skarmory and the like from stalling/phasing Gyarados out and turning them into more setup fodder.

DYNAMAX:
This Gyarados is not as proficient at Dynamaxing but can still make a splash. Max Airstream is just as ridiculously potent as ever, providing further Speed boosts while nabbing knock outs and Max Geyser providing Rain enables further escalation. However, the lack of coverage leaves this suited only for emergencies and the late game where checks have been weakened or removed.

EVs and Items:
Standard Sweeper Array. You want as much speed and power as possible to get the most out of Dynamax. Gyarados is on the slow side, so the Speed Boosting Jolly is preferred. Lum Berry gives Gyarados more setup opportunities and enables it to eat a Scald or Toxic without being ruined before it can shutdown the opponent, though other options like Life Orb for more damage, Sitrus Berry to counteract any damage taken while setting up Dragon Dances, while Wacan Berry can punish predicted Electric attacks.

Partners:
Since Gyarados canít run all the coverage it wants, being able to cover Gyaradosís gaps are more important. Grass types like Rillaboom, Venusaur and Ferrothorn all reliably answer the Water and Grass types that otherwise force Gyarados to retreat or boost excessively to muscle through. Nidoqueen and Nidoking can reliably pivot into Electric attacks and have wide special coverage to check and answer both Electric and Steel types along with dedicated physical walls.

Other Options:
Ice Fang -hits many Dragon types hard, but most are still hit hard by Max Airstream.
Fire Blast -can be a nasty surprise for Ferrothorn, and thus worth consideration, but is only a 2HKO and its lack of synergy is apparent.
Stone Edge -Gyaradosí best option for Zapdos
Earthquake -covers Steel and Electric types like Magnezone and Dracozolt
Power Whip -covers Water types like Quagsire, Rotom-Wash and Swampert

Faster Electric types make some of the most reliable checks to Gyarados around, easily revenge KOing it or forcing it out. Regieleki is particularly distressing, requiring two Speed boosts to outspeed, while OHKOing back with any Electric STAB. Tapu Koko, Jolteon and Zeraora also fill this niche quite well. Otherwise, answering Gyarados comes down to what moves it is missing.

Gyarados lacking Power Whip find themselves walled by Rotom Wash who can easily tank Gyarados STABs, OHKO it with Electric attacks or cripple it with Will O Wisp. Defensive Water types like Cloyster, and Lapras also prove problematic able to take a hit or three and OHKO with their own coverage/STAB.

Gyarados lacking Earthquake have difficulty pressuring Electric types as well as resilient Steel types like Magnezone, and Magearna, former being distressing when Gyarados needs that One Hit KO lest it receives the same.

Zapdos is consistently problematic, only fearing the rare Stone Edge, and able to tank even a boosted Waterfall and threatening a One Hit KO.

Tangrowth becomes problematic if Gyarados is missing Bounce, as Ice Fang does not do enough damage to compensate.

Other bulky walls like Umbreon, Mandibuzz, and Skarmory can all reliably tank boosted attacks and KO with Foul Play/phaze out with Whirlwind respectively though they in turn can be crippled by Taunt. 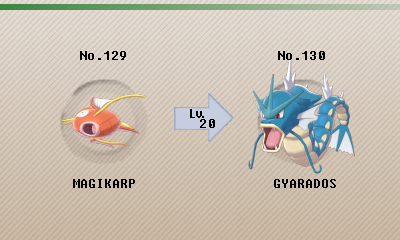