Record Mixing is one of the multiplayer features that are included in the main 3rd Generation titles: Ruby, Sapphire, and Emerald. It generally transfers data that you have put into the game to other people for their pleasure to use. Some of the things that are done are just meant for entertainment, and some have an effect on what you can do with your pokemon in the game. Outlining the possibilities is the purpose of this guide of course.

First off is how you exactly do mix records. You need two games; Ruby, Sapphire, or Emerald. Second, you need two Game Boy Advance units, whether they are the normal Advance, the SP version, or if you come from the future, the Game Boy Micro. The last thing you need is simply a link cable. Or two/three, if thereís more than two people you want to mix records with at the same time. The Gameboy Advance unit will allow up to three other people to mix records with at one time. Then after you have that done, go to the Pokemon Center and head to the top floor, talking to the person that will allow you to mix records (the stall farthest away from the elevator). Enter, sit in a chair, and wait for your friends to sit as well, then voila. Records mixed.

Now what exactly does this do? It changes a bunch of things in your game. The first possible thing it can do is give you a bunch of other TV shows to watch. These are the TV shows only available by mixing records:

* - You can get these yourself, but these carry over to your game when records are mixed.

The third thing it does is change what the guy in the Pokemon Center of Mauville says or does, depending on his color. If he is Blue, he sings songs and lets you change a word every time you mix records. If he is Pink, he keeps the most random records of things youíve done, from how many times you fished, how many times you went in the spa, or how many times you used Splash. Brown and Red colored people there can add phrases to your vocabulary. Black is the most useful out of this bunch, being a secret base item trader.

The fourth thing that Record Mixing can do is change the trendy phrase in Dewford. Unfortunately this also changes the Feebas spots to be the same as your friends so make sure they know which spots have Feebas

The sixth thing is probably the most useful and most fun feature; transferal of your friendís secret bases to your game. The exact spot and furniture arrangement of your friendís game will be put into yours. After you defeat the Elite Four, you can fight your friend if you so desire in their own secret base. Their character will not be the normal Ruby/Sapphire trainers however. They will range from being things like a Cooltrainer, School Kid, Youngster, Lady, and Picnicker, depending on gender and your ID number. If you follow this random equation I am about to give you, then you can figure it out. :P Not that you canít find out anyway by mixing records and having someone else fight you.

So if we take this 5 and look at the chart, we would find ourselves being either a Youngster or a Lass.

And Finally, the last thing is the transferral of the Eon Ticket over to your friends games, the person with the Eon Ticket must be connected to the Player 1 Slot while the rest aren't. The Eon Ticket must also be one obtained by the trainer through legitimate means without Mixing Records. This will allow you to go to Southern Island and catch Latios/Latias 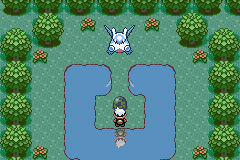