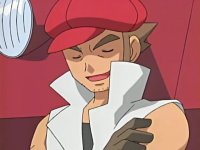 Noland is the head of the Battle Factory. However even with these duties, Noland really enjoys piloting a plane that he built around the City and area of the Battle Factory. Noland, as a Frontier Brain, gives the trainers that challenge him a choice in the Pokťmon that they battle, and with this he has a great deal of Pokťmon stating that it adds for more variety in battle. Noland is a caring guy who cares about his Pokťmon and the environment around them

Noland has worked up the ranks and competed to be a Frontier Brain and now runs the Frontier Facility; The Battle Factory. He gives the Knowledge Symbol to trainers that defeat him.