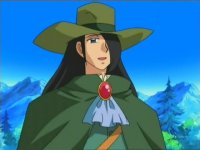 Nando is a rather unique trainer in that he is battling in both contests and gyms with the hope of being in both the Pokémon League and the Grand Festivals in Sinnoh. He is a compotent trainer and also enjoys to play on his harp, which is shaped like a Mew. Due to his taking up of both vocations, he is a rival to both Ash & Dawn