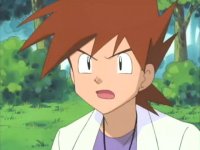 Gary, the grandson of renowned Pokťmon Researcher, Professor Oak, has had a life long rivaly with Ash Ketchum. Starting based on a fishing scuffle where they both claimed ownership of a Pokťball used for fishing, Gary has always had it in for Ash. Gary started off as an extremely arrogant kid who somehow managed to amass a group of Cheerleaders, cheering only for Gary. After he lost in the Pokťmon League, Gary ditched the cheerleaders and after some soul searching, started to become less arrogant and more of a compotent Pokťmon Trainer. Finally, after his defeat against Ash, Gary, with humility, mended the fences with Ash finally and decided to stop being a Pokťmon Trainer and instead to follow in his grandfather's footsteps and become a Pokťmon Researcher.

Gary defeated 10 Gyms in Kanto and got to the Fourth Round in the Pokťmon League. He also has defeated at least 8 gyms in Johto and came in the Top 32 in the Silver Conference