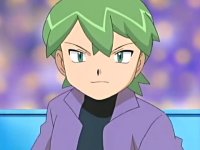 Drew, with his starter Roselia, is an avid fan of Pokémon Contests, however after suffering a defeat in his first contest, he endeavored to strive harder. Since then he has become a confident Co-Ordinator and is rather critical of those who were similar to how he was. When in Slateport City, he met May, a young co-ordiantor who was just starting out and has since been helping May out at contests, even though he is sometimes critical of her. Drew has ammassed a fair few supporters during his contest endeavors. Drew is continuing to strive to become the best co-ordinator, and even through his critical nature, Drew does care for his Pokémon and for other co-ordinators and his friends and has been known to get them out of binds and tricks set by Team Rocket and Harley.