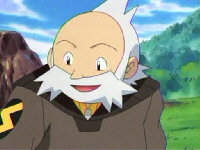 Wattson is the Gym Leader in Mauville City. A generally cheerful guy, Wattson has set traps in his gym for trainers to overcome, finding them hilarious. However when Ash battled Wattson, he defeated him so easily that Wattson stopped being so cheery and became depressed. However after meeting an Electrike, he started to perk up. Wattson really cares about Pokémon and is kindhearted toallow people to keep their badges, even if they feel they don't deserve them.

Wattson has worked up the ranks and become the Mauville City Gym Leader.