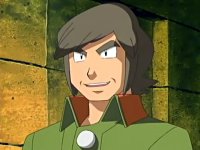 Hometown: ?, Kanto
First Appearence In Episode: Battling the Enemy Within

Brandon is known as the Pyramid King. Being a Ruin enthusiast, he based his battling facility upon the Great Pyamids of Giza in Egypt. However unlike those Pyramids, he uses his as a means of transport to travel around Kanto to search through ruins for Ancient Treasures. However unlike the other Frontier Brains, Brandon owns several legendary Pokémon that he uses in battle making him the toughest Frontier Brain and one of the strongest trainers in the world. Brandon is rather eccentric and clearly and deeply loves Ancient Cultures and knows a great deal about them.

Brandon has worked up the ranks and competed to be a Frontier Brain and now runs the Frontier Facility; The Battle Pyramid. He gives the Brave Symbol to trainers that defeat him.