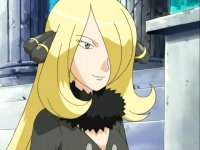 Cynthia is the Champion of Sinnoh, one of the strongest trainers in the land and quite possibly the world. She is quite compassionate still and rather down to earth. Even when she defeats a trainer, she makes a point to give them pointers and help them take care of their wounded Pokémon. She is also interested in the mythology behind the land

Cynthia has risen up the ranks. defeating all of the Elite Four and became the Champion of Sinnoh