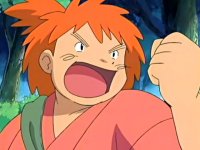 Morrison is a Pokémon trainer, who met Ash while he was training for the Hoenn League. Morrison is a very kind guy, but is over endulgent in regards to food. When he met Ash, the two had a harsh Rivalry, each trying to outdo eachother in non-Pokémon elements but became good friends. However since they were good friends, when they battled in the League, Morrison was not putting his heart into it, however eventually after that encouragement of Ash, he put his heart into it and battled to his maximum potential.

He has had these Pokémon: