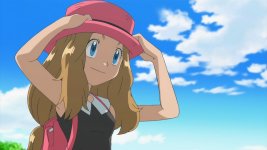 Serena is a new trainer who is just starting her journey. Her goal is to be a Rhyhorn racer, to follow in her mother's footsteps, but she has since taken to making PokéPuffs. She's a compassionate person, often taking care of her mother's Rhyhorn. Back in the past, she had some history with Ash when he helped her after she had been inadvertently attacked by a Poliwag, and she is interested in fashion. Due to this, she became interested in the various PokéVision videos and is pursuing a journey in performing. After her performances in the Kalos region showcases, she heads to the Hoenn region to enter Pokémon Contests.