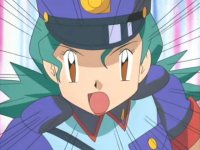 Officer Jenny is the name of a massive family of Police Officers spread across the world. Since there are so many of them and they are all identical, many people believe that they are the same person at first, until they are corrected. As Police Officers, they are law abiding and brave, always there to try and stop illegal activities, however sometimes they are unable to and Team Rocket are stopped by Ash & Co. While each Jenny does act and sound alike, there are subtle differences in uniform and badges. Brock is also fully capable of telling the difference between them through their subtle personality differences.

Officer Jenny has a counterpart within Unova that is completely different