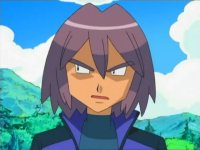 Paul is a rather arrogant trainer. From Veilstone City, he headed to Sandgem to get his starter, he has since travelled through Kanto, Johto & Hoenn. However, he is not a caring trainer, what he wants from his Pokťmon is pure power and the trainers he faces to be strong. When he first meets Ash, he demands a 3 on 3 Battle, however since Ash was still looking for Pikachu, Ash couldn't battle, this warranted some aggrivation on Paul's part. Paul is also known to release his Pokťmon if he deems them weak or useless.

Paul has competed in the Kanto, Johto & Hoenn leagues and has obtained several Sinnoh gym badges. After his journeys through Sinnoh, he became a Gym Leader