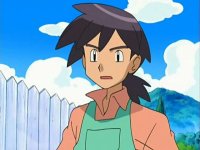 Reggie is Paul's brother. Living in Veilstone City, Reggie works as a Pokťmon breeder, looking after many Pokťmon, including Paul's when Paul needs space on his team. Before he became a Pokťmon Breeder, Reggie travelled round the world partaking in Pokťmon battles including gym and championship matches. Although he does not approve of some of Paul's training methods, he still looks after the Pokťmon and also offers aid to Ash & Co. when they arrive in Veilstone City

Reggie has partaken in many gyms and won across many regions, rivalling Ash's achievements