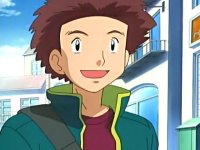 Hometown: Mauville City, Hoenn
First Appearence In Episode: Like a Meowth to a Flame!

Tyson is a Pokémon Trainer from Mauville City. Since he has been going as a trainer for several years, he has made quite a team behind him. Unlike most, he is not arrogant because of his strengths in Pokémon. Always ambitious, Tyson made it to the EverGrande City Pokémon League for Hoenn, where he met and quickly befriended Ash & Co. Teamed with the Meowth that he rescued, Tyson always try his hardest in Pokémon Battles and is currently continuing his journey in a different land.