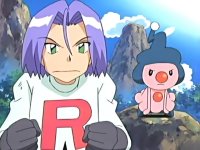 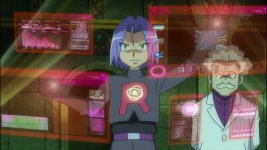 James came from a wealthy family, with attendants that catered to his every need and whim. He attended Pokťmon Tech, a school to learn about Pokťmon. Eventually, James got fed up with this lifestyle and left home with only his companion, Growlie. Soon after that he joined the Bridge Bike Gang and later on decided that it would be best to join Team Rocket. Teamed up with Jessie & Meowth, James has always been there for Team Rocket. Although he is part of Team Rocket, he is a really kind person and really cares for his Pokťmon and his friends.

James hasn't had many achievements, he has entered in several contests including the PokťRinger contest and the Pokťmon Orienteering Contest that he won.