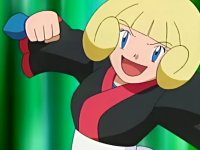 Greta is the head of the Battle Arena. Being a fighting Pokémon trainer, Greta is an expert in Martial Arts and often trains with the people in the Arena on many occassions. As a Frontier Brain, Greta's battles have a little twist. In the Battle Arena, Greta spins a wheel which decides how many Pokémon battle; 1, 2 or 3 and all the Pokémon decided on have to be declared before the battle commences. This determines the strategy that her challengers have to use. Despite her gruff Fighting exterior, Greta is a kind person and is fairly modest when she is beaten

Greta has worked up the ranks and competed to be a Frontier Brain and now runs the Frontier Facility; The Battle Arena. She gives the Guts Symbol to trainers that defeat her.