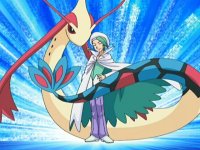 Wallace is a legendary Pokémon Trainer & co-ordinator. Originally a gym leader in Sootopolis, Wallace then went on to become the Hoenn Champion before he became the Contest Master. As he is a Contest Master, he is known world-round for his magnificent appeals and strong Pokémon. He has a love for contests and even hosts and judges his own contests dotted aorund the world

Wallace was the Gym Leader in Sootopolis, the Hoenn Champion and is currently labelled as a Contest Master.