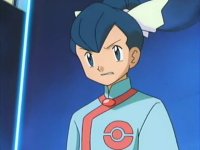 Tate is the co-Gym Leader in Mossdeep City. Tate is the youngest sibling in his family, which Liza tends to hoard over. Tate's father owns the Mossdeep Space Centre, and with that, Tate has been known to go into space on occasion and knows how to fly a Rocket. While he is slightly unexperienced in battle, he cares for his Pokémon and has learned to work with his sister Liza in defeating their Gym Opponents.

Tate has worked up the ranks and become the Mossdeep City Gym Leader with his sister Liza.