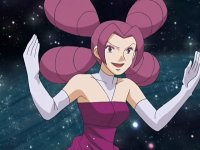 Fantina is the Gym Leader in Hearthome City City. Fantina is a unique Gym Leader in that she not only partakes in gym matches, but she also competes within Pokémon Contests. With Ghost Pokémon as her speciality, she is a very formidiable trainer and quite often, the trainers she faces have to have a rematch against her. Despite this, she's always happy to battle people, even if she is off on one of her journeys that takes her away from her gym/

Fantina has worked up the ranks and become the Hearthome City Gym Leader.