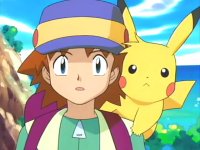 Hometown: ?
First Appearence In Episode: A Friend In Deed!

Richie is a young Pokémon trainer from Kanto. Richie is a really kind kid who enjoys Pokémon Battles and making friends. Showing his eccentricity, Richie nicknames his Pokémon to make them more personal. He also marks his Pokéballs just in case he gets seperated from them so he knows which ones are his. In the Indigo League, Richie quickly befriended Ash and they became close friends and ended up having to battle eachother. However due to Ash's unruley Charizard, Richie defeated Ash. After losing in the next match, Richie continued to travel and visited the Whirl Islands in Johto while still travelling through Kanto on many occassions.