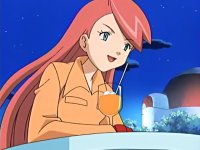 Hometown: Pewter City, Kanto
First Appearence In Episode: May, We Harley Drew'd Ya

Soledad is a Pokémon Co-ordinator from Pewter City. Having been training for contests for quite a while, Soledad was the first opponent of Drew's and easily defeated him. After this, Soledad and Drew managed to become good friends. Being a kind person, Soledad is always there to help people out with strategies or to compliment them on a job well done.
In the Kanto Grand Festival, she managed to get to the finals, defeating May and ended up winning the whole Grand Festival.

Soledad has won at least 5 different Pokémon Contests. She won the Kanto Grand Festival after defeating May and going onto the finals