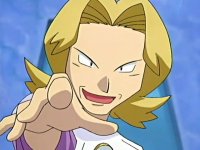 Agatha is a member of the powerful Elite Four trainers. When Ash returned to Kanto from Hoenn, he met up with Agatha as she was temporarily running the Viridian City Gym until they find a new Gym Leader. Accepting Ash's Challenge under the advice of Scott, Agatha easily defeated Ash. Agatha is generally a kind person and helps other trainer's see where they go wrong in battle. However the true extent of her abilities is unknown.