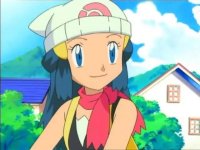 Dawn is an eager girl who has just started on her Pokémon journey. Coming from a family of co-ordinators, her mother winning the Grand Festival, Dawn has her heart set on following in her mother's footsteps and being a great Pokémon Co-ordinator in the Pokémon Super Contests. After befriending Piplup while searching for a Chimchar that escaped from the lab, she quickly met with Ash after finding Pikachu whom was running from Team Rocket. Dawn soon decided to join Ash on his journey through Sinnoh. However, Dawn does seem to be a bit too sure of herself and her strengths as a trainer

Since Dawn is just starting out, her achievements are few and far between: