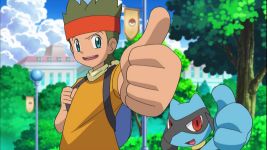 Cameron is a Pokémon Trainer who appeared after the Junior Cup, heading to Humilau City to attempt to earn his 8th Unova Badge, and coming for the Junior Cup, to which he arrived late. He's a very enthusiastic trainer, happily greeting new people. However, he is also forgetful, late and gets information wrong. For example, he thought you only needed 7 badges to enter the league, and mistakenly thought the league was to be in Ecruteak City in Johto